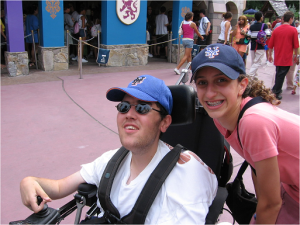 From the age of six, Nathaniel Richman Cohen suffered from the effects of Duchenne muscular dystrophy, a rare congenital disorder that caused him to grow progressively weaker with each passing year. He lost the ability to walk when he was eight years old. By his teenage years, he was a quadriplegic and wheelchair-bound. Nathaniel was determined to lead as normal a life possible, and to him that meant attending a typical summer sleep-away camp, just like all his friends. He attended Camp Nesher before entering the 6th grade and spent every subsequent summer there, first as a camper and then as a staff member, until his death in April 2007 at the age of 21.

Nathaniel was a well-rounded kid who loved camp. Whether singing in the choir, acting in plays, or discussing the weekly Torah portion, he enjoyed it all. Most of all, Nathaniel loved playing sports, especially baseball, basketball and hockey. He never let his disabilities stop him from participating. At Camp Nesher, Nathaniel’s place on the team became the norm. When other camps would see this boy in a wheelchair taking to the field with his aide at the shortstop position, playing goalie on the hockey rink, or bringing the basketball up the court, they were stunned. What always began as disbelief almost always ended as sheer respect and admiration for the boy who would not accept “maybe you should sit this one out.” Nathaniel spent his final years at camp as a valued member of the athletics staff, even as his abilities to physically contribute waned.

Nathaniel was popular at camp. People often commented that when speaking with Nathaniel, you somehow stopped noticing that you were talking to a guy in a wheelchair and were rather just shmoozing with a friend.  A connection with Nathaniel helped many people see through disabilities and recognize, instead, that special abilities can lie within. Camp Nesher has been enriched by all of its campers and staff, but without Nathaniel Cohen, it would not be the Camp Nesher it is today. 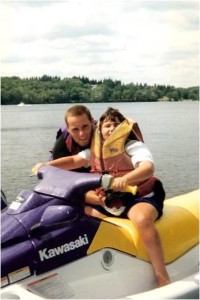